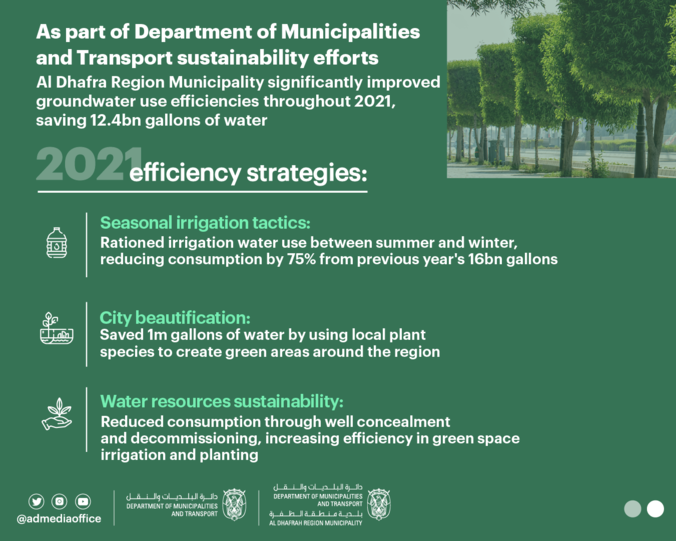 Department of Municipalities and Transport (DMT) implemented the operational stages to increase groundwater efficiency in irrigation and reduce irrigation in green areas, roadsides, roundabouts, and median islands through Al Dhafrah Region Municipality, a DMT affiliated entity. The operation comes as part of DMT's efforts to sustain natural resources in its operations and to maintain the general appearance of the Emirate.

The Department of Municipalities and Transport continues to expand its strategy in the future phases to include Abu Dhabi City and Al Ain City.

Seasonal irrigation tactics were introduced as one of the primary strategies, which resulted in a 75% reduction in irrigation water usage from the previous year's consumption of 16 billion gallons and will save 12.4 billion gallons every year.

DRM’s city beautification initiative, which aimed to create green areas in the region by planting trees at city gates, roundabouts, and traffic islands, used a range of local plant species which helps save approximately one million gallons of water per year. The local plant species cover a 58,000 sq m area under the beautification project, which includes 40 roundabouts and several traffic islands covering an area of 156,000 sq m.

DRM also removed 61,611 harmful trees from numerous communities across the region, as they severely impacted groundwater and had a negative impact on the infrastructural assets and the city's overall appearance. The removal of these harmful trees and replacing them with beautifying local plant species in these communities will result in the reduction of water consumption to 66 million gallons a year.

In addition, the municipality distributed 825 bags of seeds and 12,050 seed balls across 278 locations in Grand Baynunah and Qusahwira, covering an area of 2490 sq km and 5990 sq km, respectively.

19 groundwater wells near Jebel Dhanna and along the Ghweifat International Highway were decommissioned as part of the department's goal to boost groundwater consumption efficiency, while several others were only partially operational.

DMT covered 504 wells in areas where diseased and dying trees were removed as part of the beautification maintenance to keep up the city's appearance, with another 33 wells covered as part of its ongoing effort to conceal abandoned wells.

Al Dhafrah Region Municipality won the internationally recognized Green Apple Award in 2021 for environmental sustainability in processing and recycling agricultural waste, making it the first entity in Abu Dhabi to win this award. Furthermore, the award recognized the municipality's seed dispersal and collection efforts, increasing the production of dates and the municipality's ability to provide shelter and food for wildlife in reserves.

DRM continues its efforts to maintain its ranks, receive international awards in different fields, and continue implementing the best sustainability practices aligning with the comprehensive development plan for the Emirate of Abu Dhabi.