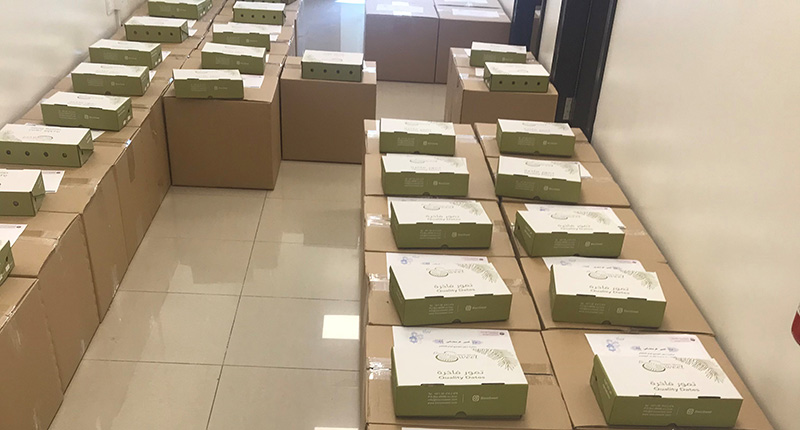 The Municipality of Abu Dhabi City, through its sub-stations, implemented the “Meer Ramadan” initiative, in cooperation with several strategic partners, through which the food boxes were distributed to 755 of humble families in Abu Dhabi city, which was identified according to the data approved by the relevant authorities.


The initiative aimed to consolidate the values of giving, compassion, and cohesion in the hearts of society's members, and to promote social solidarity and social responsibility, and to bring joy and happiness to the needy families during the holy month of Ramadan, as well as to manage food security for citizens interacting with the efforts made by the country and various government entities, and to embody communication and collaboration Societally.


The Municipality of Abu Dhabi City, through the Department of Community Services Operations, as part of the Meer Ramadan initiative, and in cooperation with Agthia and other strategic partners, divided 300 food baskets to several needy families in the city of Abu Dhabi and mainland areas.

Within the project of the Community Ambassador for Al Mushrif 2020, the City Center Municipality, in cooperation with the Emirates Red Crescent Authority, Al Mushrif Co-operative Society, and Biscosweet Company for Luxury Dates, has completed the Ramadan Meer initiative in Al Mushrif Area in Abu Dhabi.

Which targeted needy families by dividing 160 food baskets containing more than 15 basic food products and delivering them to their homes, taking into account adherence of the medical guidelines issued by the Health Authority during the distribution process, to maintain the safety of all members in society.

The Municipal Presence Center-Khalifa City, in cooperation with the Center for Conservation of Grace, distributed 30 Ramdan Meer to the needy families in Khalifa City, which was determined according to the available data on the social cases that were confirmed by the Ministry of Community Development for the cases affiliated to Khalifa City.


The Al Wathba Municipality Center has distributed the Ramadan Meer to 30 humble families in separate areas within the center's geographical range, which was identified in cooperation with the Emirates Red Crescent Authority, where two teams from the Community Services and Happiness Department were formed at the center, to distribute the Ramadan Meer to the suitable families.

The Madinat Zayed Municipality Center completed the Ramadan Meer initiative, in cooperation with the Emirates Red Crescent Authority, distributing 30 Ramadan Meer to helpless and low-income families in the geographical area within the scope of the center.


It is worth noting that the Municipality of Abu Dhabi City is keen on implementing many creative community initiatives during the year, in cooperation with strategic partners, to enhance community participation and positive interaction with various organizations and companies, and spread happiness among the society, also to activate its social role that is rooted in community service and support to all its categories on different occasions.